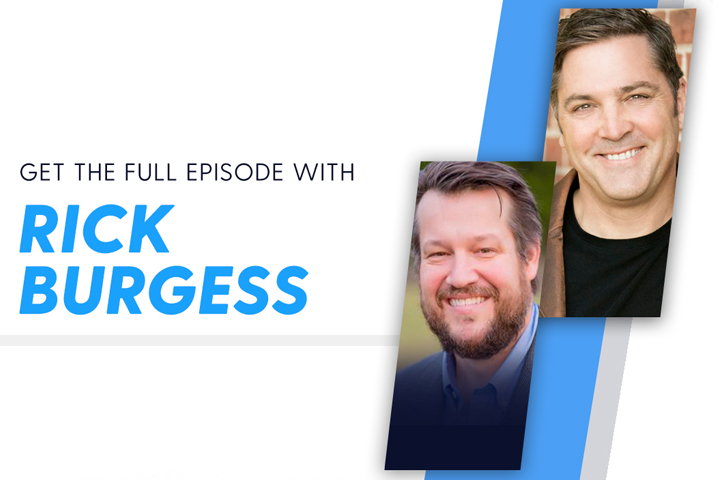 COLORADO SPRINGS — Ken Harrison, CEO of WaterStone and volunteer chairman of Promise Keepers, is joined by Rick Burgess on the latest podcast of “On the Edge with Ken Harrison.” Together, they talk about losing a loved one, building a strong household under Christ, and the importance of a father’s leadership in times of turbulence.

Rick Burgess has been the co-host of the “Rick and Bubba Show” since 1994, a nationally syndicated radio show which airs to 1.2 million people weekly. Burgess has coauthored multiple New York Times bestselling books that are autobiographical in nature, but his latest release is a 40-day devotional designed to disciple men. How to Be a Man, the Pursuit of Christ-Centered Masculinity is coauthored by Andy Blanks and was released by Iron Hill Press in 2017. Burgess has appeared on various radio and television shows including Fox and Friends and the Sean Hannity Show as a commentator and guest. He is a frequent speaker at church services and youth and marriage conferences, but his true passion is men’s ministry.

Highlights of Burgess’ interview in the podcast include:

“The chaplain said, ‘Mr. Burgess, are you alone?’ Uncontrollably I said, ‘I’m never alone. I’m never alone.’ You know, we’re never alone if we belong to Christ. We have God’s spirit in us, the Holy Spirit, he’s always there, the comforter, the helper, and I felt the presence of God. I felt his comfort. I felt his strength saying, ‘I’m here and I’m in control.’ And then I said something to the chaplain that was so weird that it could only have been supernatural. I said, ‘I can’t imagine what you have to do every day.’ And the chaplain replied, ‘What?’ I said, ‘I don’t know, I just feel like I need to pray for you. I can’t believe you have to tell people what you’re about to tell me. You have to do this every day.’ I just had a connection to this chaplain and then the chaplain said, ‘Mr. Burgess, your son could not be revived. Your son’s passed away.’ ”

“In my wife’s book, she asks the question, ‘Where is God in this?’ And the answer is right in the middle of it. Scripture is not silent on suffering and pain. We are told about suffering and who God is in it. At the time our son passed, she was grasping for answers. She told me, ‘I was there and I was praying for my child to be revived. They were trying to revive him. I can remember these audible words coming out of my mouth that I couldn’t pray.’ Sometimes the Holy Spirit prays, what you ought to be praying. She said, ‘I heard myself saying, not my will, but your will be done, Lord.’ She told me, ‘I couldn’t say that because I didn’t really want that, I wanted him to do what I want.’ But — it is his will be done, Jesus in the garden, Father, not my will, because there’s no other way.”

“Our marriage is not based on Rick and Sherry. I’m imperfect. She’s imperfect. I don’t put pressure on her to fulfill me. She doesn’t put pressure on me to fulfill her. My wife and I built our house under the authority of Christ. And I can honestly tell you that I believe that marriages that fail in our situation are marriages that are not under the authority of Christ. I believe this reveals the state of the marriage. I knew who God was because he had prepared me for this. I wasn’t losing my mind, thinking ‘How do these things happen? What is his? Why do bad things happen to good people?’ You know why? Because I knew I wasn’t a good person. There are no good people. I wasn’t thinking ‘What was my wife doing?’ or how I should have been home at the time and not speaking at an event hour away. We never blamed each other. You know, I knew Psalms 139:13-16 that he had weaved my child together in his mother’s womb, my wife’s womb, and that he had written in his book every day of Brauner’s life before he had ever lived one. So my son’s life is not incomplete, it was completed in two and a half years because that’s what God designed. I’ve been able to see what God has done through that little boy to impact more people than those who are in their 80’s.”

“I remember my father and I would be in our boat, out on the water and sometimes storms would be coming for us. And I remember as a little boy I would look at my dad with those big muscular legs and a pair of shorts as he would get up on the steering wheel and start looking over everything. The minute I would see him taking the lead on our boat, I was at perfect peace. I thought ‘Well there’s dad, he’s got this now.’ I never knew whether he had it or not or if there were times where he was panicked because we were in trouble. I never noticed because I never saw it. He was always calm and under control. So when I looked at him, he was a calming force.”

“In times of turbulence, our families need to see fathers acting as a calming force and the man of God in their house. ‘Hey, Dad, is everything going to be all right?’ It is our responsibility to reply, ‘Yes, let me tell you who God is.’ Let us take what the scriptures say and give these truths to our children. We need to tell them, ‘It really is going to be alright because of this biblical truth.’ When they ask us, ‘Why is this happening?’ We hit them with another Biblical truth. It is our responsibilities as fathers and men of God to set our families up for success in times of turbulence.”