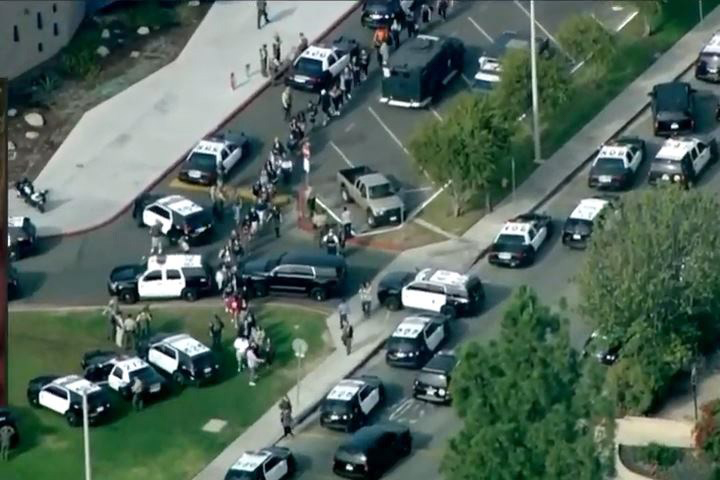 As the U.S. deals with its latest mass shooting, with at least two killed and four others injured Thursday (Nov. 14) at Saugus High School in Santa Clarita, Calif., evangelism and gun control are cited to Baptist Press as possible remedies to stem the tide of violence.

Police and other emergency personnel responded Thursday (Nov. 14) when a 16-year-old student killed two fellow students and shot four others, including himself, at Saugus High School in Santa Clarita, Calif.

A 16-year-old Asian male Saugus High School student described as the suspected shooter was being treated for a self-inflicted gunshot wound less than three hours after he is believed to have opened fire at the high school of about 2,500 students. One student was treated and released, and two others remain hospitalized.

In the hours following the shooting, many students were sheltered at Grace Baptist Church in Santa Clarita, a non-Southern Baptist congregation that hosted a night of prayer Thursday.

Baptist Press interviewed Southern Baptist evangelist Greg Laurie, whose 29th annual Southern California Harvest Crusade in August marked the longest-running evangelistic outreach in U.S. history. BP talked with Promise Keepers Chairman and CEO Ken Harrison, a former police officer who leads the evangelistic and discipleship outreach to men, and retired pastor Al Meredith, who was senior pastor at Wedgwood Baptist Church in Fort Worth, Texas, in 1999 when a gunman killed seven and injured seven others before killing himself.

Laurie, in his 2019 Southern California Harvest Crusade, reported more than 8,000 professions of faith, 65 percent of them from Millennials, he said.

“But that doesn’t mean you’re not capable of doing something horrible,” he said. “So it’s not just believing Jesus; it’s following Jesus. And it’s living by what His Word says.”

God is working among youth, Laurie said, “but we need to redouble our efforts to proclaim the Gospel.”

The motive of the suspect in Thursday’s shooting has not been revealed, but the shooting did occur on his birthday. He was taken into custody while hiding at the school with a .45 caliber semi-automatic weapon, authorities said.

“I’m sorry, it’s just not enough to say you know, ‘guns don’t kill people, people kill people,'” Meredith told BP. “Why is our death rate so much higher? Why do we have mass shootings that have become common place, they don’t even register on our emotional radar? And other countries like Scandinavia, and Germany and France and Great Britain, they shake their heads in amazement at why we allow these things to happen.”

Days and weeks before BP’s interviews, two young men had killed 34 people in one weekend in August in the U.S. In El Paso, Texas, a 21-year-old man had killed 22 people and left 26 others injured at a Walmart, and a 24-year old male gunman had killed nine in a nightlife district of Dayton, Ohio. The previous weekend, a 19-year-old male was identified as the shooter after three were shot dead at the Gilroy Garlic Festival in Gilroy, Calif., about 300 miles north of Thursday’s school shooting.

“Hope is two-fold,” Meredith told BP, as tragedies make more common the term “domestic terrorism.” His views are his own, Meredith said, and not those of the church that in September marked the 20th anniversary of the 1999 shooting there.

“One, only God can change dead hearts into living hearts. Only God can transform evil characters into God-honoring people,” Meredith told BP. “In one sense, all these mass killings are an issue of the human heart. And it’s a sign of our failure as evangelicals to win the world to Christ.

“The other level,” Meredith said, “is it seems as though our problems are systemic in our society.”

“And that should tell us,” Meredith told BP, “there’s something wrong with the system (in the U.S.)…. Something must be done to change the system, both in the area of some semblance of restriction on the availability of automatic weapons. And the other issue is mental health, and somehow do a better job of caring for and bringing healing and normalcy to people that are emotionally disturbed.”

At the Southern Baptist Convention’s 2018 annual meeting in Dallas, messengers passed a resolution “On Gun Violence and Mass Shootings” addressing many of these issues. Read it here.

“The number one thing the church needs to do is let these young people know about the grace and love of Jesus Christ,” Harrison said. “But more practically … one of the biggest problems that these young men have, is they don’t have dads in the home. They don’t have positive male influences, and they’re filled with anger. I was able to see the effects of that when I was a policeman in South Central Los Angeles in the Watts-Compton area.” There, he said, where 95 percent of the population was law abiding, the influence of gang violence was prominent and left people in fear.

Problems were exacerbated by fatherlessness and a lack of Gospel evangelism, he said, adding that a father in the home doesn’t necessarily equal a stable environment.

“We as Christians, we have got to be active in sharing our faith,” Harrison said, encouraging Christians to seek opportunities to share the Gospel with people they encounter in daily life. “Just say, if there’s one thing I can pray for you today what would it be? Unbelievable where that goes.” In his experience, people rarely refuse to talk and such conversations most often lead to salvation experiences, he told BP.

The suspect’s father died two years ago, according to ABC7.com.