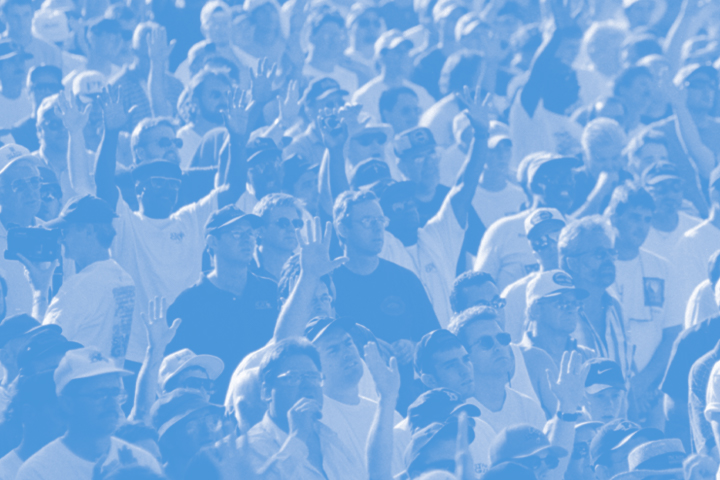 I am so excited about the TX event coming up. I have so longed to see, feel and be a part of the God-centered worship that we experienced in the PK events of the 90’s and early 2000’s.

I felt led to attend PK in 1995 and there found a deeper relationship with my God than I had ever known. I cried, I was broken and I saw the depth of my sin and selfishness. I recommitted my life to the Lord, my wife and my family.

On the brink of divorce, God reconciled my marriage. I came home, washed my wife’s feet and committed to being a servant leader in our home. I decided to live a life of Christian integrity so my children had a father they could look up to. As my children have grown, married and started their own families, I am proud to say that they and their families have a relationship with Jesus that is more than mere words and actions. They too have become servants.

One [Promise Keepers] event in particular stands out in my mind, when my son went forward during lunch as they talked… They asked the kids what they wanted to say about their dads. I could see my son on the jumbotron twice and he was excitedly raising his hand but was never called on. He came back toward his seat, fell into my arms and was crying. When I asked him what was wrong he said that he wanted everyone to know what a godly father he had. Then my tears came. I knew that I had to lead my family in God’s paths of righteousness so as not to make my son a liar. It has been a real struggle at times.

I still listen to the older PK music because it was true worship. Over the years God moved me from leading a men’s ministry, to my wife and I leading a couples ministry, to me going to school to become a Christian counselor and then into the pastorate. For the past 19 years I have been a pastor of a small, rural church. The flock is not large but we serve a large God and even the small flocks need leadership. God has done great things in and through my life. My wife and I just celebrated 43 years of marriage. My kids have been on mission trips around the world. God is good.

I know my walk with the Lord was nurtured and grew because of a PK event on a cold October night in Memphis, TN. Thank you PK for coming back to the roots where we started. Let’s reach this next generation of men for God so that they, too, can know the peace that comes from a right relationship with Him, with family and with friends. The ills that our country faces—anger, violence, hatred—can all be overcome by the grace of God. We must not only teach it, we must live it.

God bless you all.

This testimonial was sent to Promise Keepers by a man whose life was transformed. If you have a PK story you’d like to share, we would love to hear. Send us your PK story today.