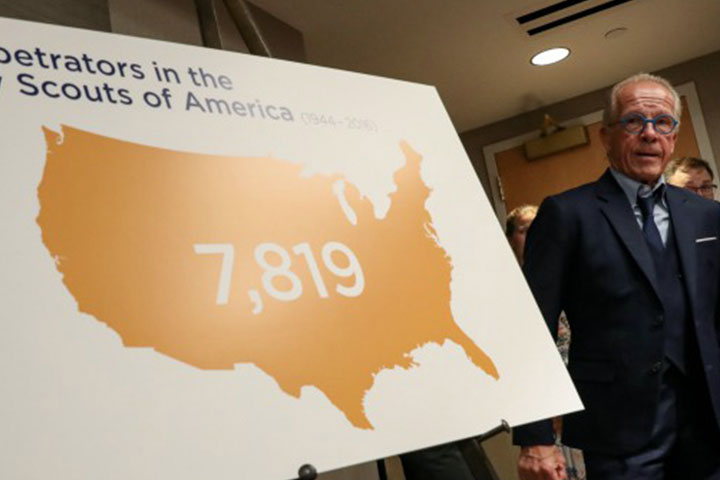 “That is a number not known before today or ever revealed by the Boy Scouts of America,” said Anderson, who represents former scouts.

The numbers come from the “perversion files,” which The New York Times reports began after World War I and continued through 2016. The files named 7,819 “perpetrators” and 12,254 victims.

Though the “perversion files” were unsealed in 2012, an expert recently reviewed the files and shared her findings in a testimony earlier this year.

Janet Warren, a professor at the University of Virginia, said during her testimony that she had been hired by the Boy Scouts and spent five years reviewing data in these files that contained information on volunteers whose involvement in the group had been ended “because of reasonable allegations of child sexual abuse.”

“The alarming thing about this is not just the number but the fact is that the Boy Scouts of America has never actually released these names in any form that can be known to the public,” says Anderson.

He continued: “The disclosure made by Dr. Janet Warren really sounded the alarm to us.”

The existence of the abuse database is not new but the scope of the abuse is. In 2012, more than 14,000 pages of documents relating to abuse by 1,247 scout leaders was released in connection to a case in Oregon. That same year, The Los Angeles Times createda database detailing about 5,000 men and a small number of women tied to the Boy Scouts who were expelled in connection to sexual abuse.

Warren’s number shows a significant jump in that number, and Anderson is calling for the Boy Scouts of America to make the list public.

“This is information that the Boy Scouts has and has had for several years … [and is still] keeping secret today,” Anderson said.

The Boy Scouts said “every instance of suspected abuse is reported to law enforcement.”

“Additionally, all of the names on the ‘Anderson List’ are publicly available; all of these individuals were removed from Scouting and reported to law enforcement,” the Boy Scouts said in a statement.

The Boy Scouts could be hit with more sexual abuse allegations, though, as states expand their statute of limitations laws.

States have been moving in recent months to adjust their statute of limitations laws so that victims of long-ago sexual abuse can sue for damages. New York state has passed a law that will allow such lawsuits starting in August. A similar bill in New Jersey has reached the governor’s desk. Bills also are pending in Pennsylvania and California.

In New York and elsewhere, lawyers are hard at work recruiting clients to sue the Boy Scouts, alleging they were molested as youths by scoutmasters or other volunteers.

Plaintiffs’ lawyers “recognize that this is a very unique and lucrative opportunity,” said attorney Karen Bitar, who formerly handled sex-crime cases as a prosecutor in Brooklyn before going into private practice.

Attorney Tim Kosnoff, a veteran of major sexual abuse lawsuits against the Roman Catholic Church, said Tuesday that he and his team have signed up 186 clients from dozens of states in just the past few weeks who want to be part of litigation against the Boy Scouts. Kosnoff said 166 of them identified alleged abusers who have not been named in any of the Boy Scout files made public in past years.

Many Christian families have backed away from Boy Scouts in recent years as the organization shifted to accommodate the changing cultural climate. Other scouting organizations with biblical values emerged, including Trail Life USA.

“Our culture is rife with confusing messages about human sexuality that are contrary to what we know the Bible says,” says Mark Hancock, CEO of Trail Life. “Although in a fallen world it’s impossible to guarantee the safety of our children, Trail Life USA is doing what it can to make clear statements on purity, sin, and gender roles, as well as provide regular criminal background checks and child safety and youth protection training to all of our adult members. Our 1-2-3 Child Protection Policy means no one-on-one contact between an adult and child, 2-deep adult leadership in every setting, and buddy systems of 3 or more boys. We also require any incidents be immediately reported to authorities and manage none of those in-house.

“Christian families need to take care to place their children only in programs that are clear in their stand on biblical sexual purity and gender roles, vigilant in their efforts to keep kids safe, and rigorous in the management of any actual or suspected violations,” Hancock says.

In 2017, when the Boy Scouts announced girls who identified as boys would be allowed in, Christian organizations like Trail Life USA doubled down on their biblical values.

“It’s the beginning of the end of what the Boy Scouts used to mean,” John Stemberger, chairman of the board for Trail Life USA, said at the time. “It’s really a sad move.”

Other Christian leaders have tracked the Boy Scouts with heartache at the organization’s downfall.

“As we’ve all watched the caving and compromise within this wonderful organization, many of us warned of what would happen as well as withdrew our sons and grandsons from involvement,” says cultural commentator Larry Tomczak.

“We recall the over 100-year oath boys took and worked with dads and leaders to uphold, especially to remain morally clean: ‘On my honor I will do my best to do my duty to God and my country and to obey the Scout Law; to help other people at all times; to keep myself physically strong, mentally awake and morally straight.’

Ken Harrison, CEO and chairman of the board of Promise Keepers, said: “Men are commanded by God to nourish and cherish their wives and children, to lay down their lives for them, to love them even as Christ loved the church. Instead, these scout leaders did just the opposite–using children for their own sexual gratification. But it’s not just for the Scouts to dramatically increase its vigilance, we need Christian men everywhere to commit themselves to building strong marriages and families through love, protection and biblical values.”