In ‘On the Edge with Ken Harrison,’ Duck Dynasty’s Phil and Al Robertson Share The Rock Bottom Moments That Brought Their Surrender To ChristPK Manager2020-12-11T01:00:41+00:00 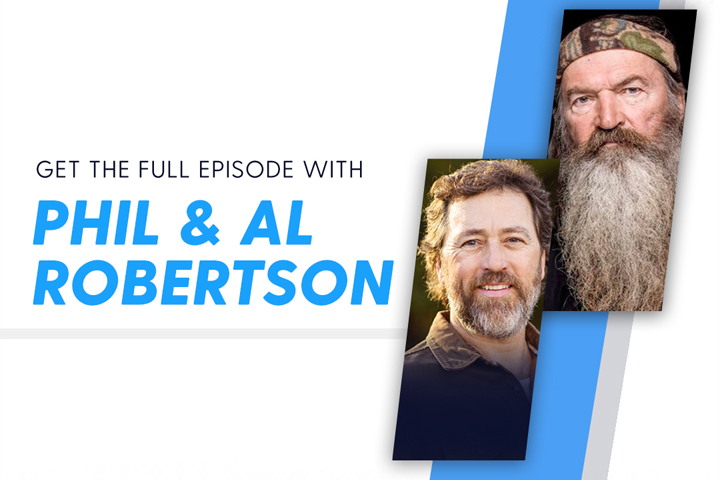 COLORADO SPRINGS — Ken Harrison, CEO of WaterStone and volunteer chairman of Promise Keepers, explores issues of infidelity, overcoming sin, and finding redemption with Phil and Al Robertson on the latest podcast of “On the Edge with Ken Harrison.”

Phil Robertson is a professional hunter who invented his own duck call and founded the successful Duck Commander Company. He also starred in the popular television series on A&E, Duck Dynasty, and is now the host of the new subscription television series In the Woods with Phil on CRTV.com. He is a New York Times bestselling author of The Theft of America’s Soul, Happy, Happy, Happy, and UnPHILtered. His newest release is Jesus Politics: How to Win Back The Soul of America. He and his wife, Kay, live in West Monroe, Louisiana. He has five children, 18 grandchildren, and seven great-grandchildren.

Al Robertson is the oldest son of Phil and Kay Robertson. He helped start the family business, Duck Commander and left in the late ’80s to serve as a Pastor for 22 years at the White’s Ferry Road Church in West Monroe, LA. He went back to Duck Commander in 2012 to begin appearing on Duck Dynasty with the Robertson family. Al has authored and co-authored five books and speaks around the country about the reasons behind the success of the show and the Robertson’s values of faith, family, and ducks. Al and his wife, Lisa, have been married for over 32 years and have two daughters and six grandchildren.

Highlights of Phil and Al’s interview in the podcast include:

Men who believe they are too fallible for God to lift them up need to be met with compassion and a lack of judgment.“I was just sitting on the curb. My clothes are torn. My elbows are bloody elbows and the police officer just started talking to me. He could see I was in shock, but he had compassion. He saw me at the worst moment of my life. It was at that moment sitting there, he saw an opportunity to give me grace as all the officers left. So he just started talking to me and started asking me questions. He recognized I didn’t fit into this lifestyle, sleeping with a married woman. And I was amazed because the more he talked, the more I unfolded. All this stuff I had pent up, I started just crying uncontrollably. And so I realize now, looking back, that was my brokenness moment.”

“But you know what happened was from that day forward, my life changed. When I got into ministry, it was natural for me. I removed any sort of judgmental part because I had been broken. I realized what it was like to be broken. I felt like my role at church was to create an atmosphere where anybody could come home here and find Christ, with no one to judge you. There would be no rocks thrown. In fact, we welcome people with problems because we all have problems.”

Offer yourself to God, so sin shall no longer be your master.

“You have to decide to turn from sin and die to it. A man quits getting drunk when he’s dead, he quits using drugs when he’s dead, he quits lying when he’s dead, he quits stealing when he’s dead. God let us experience a mock death, burial, and resurrection of ourselves and once we come forth from the tomb, you’re like, well, ‘I’ve been raised from the dead. I thank you, Lord.’ And if it doesn’t change your mind about how you function, that’s why you read through all the texts of the Bible. All of them say, take the bad things away, take the bad things away, add the good, take the bad things away from drugs to immorality to all of it. It just takes human beings a while to climb out of there. It’s like old habits are hard to break. We have to train ourselves to know the difference between good and evil. It’s not rocket science. It’s really not. It’s in a person’s heart. They say, you know what, what’s riding on this? You say immortality and eternal life.”