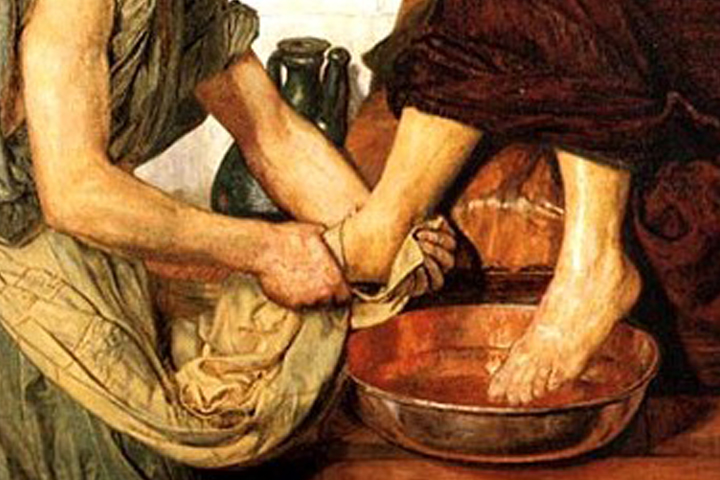 “He came to Simon Peter, who said to him, ‘Lord, do you wash my feet?’  Jesus answered him, “What I am doing you do not understand now, but afterward you will understand.”

Just about every work situation has a “gopher.” That’s the guy who does the odd jobs, runs the errands, and cleans up the messes. He’s usually underpaid and overworked. It’s a job with little hope for advancement and less affirmation. It’s the job nobody wants.

At the time of Jesus nobody wanted to be a slave. Especially demeaning was the job of foot washing—a role assigned to the lowest slave in the Oriental home. Foot washing was traditionally observed at times like this, before an intimate meal or banquet. In this dry and dusty region, sandaled feet were quickly soiled. Having washed and prepared themselves for the meal earlier, the attendees would only need their feet washed to be completely clean and ready for the festivities.

As the disciples and Jesus gathered for this Passover dinner, they had also prepared in this manner. But there was no servant present to wash their feet, and nobody was about to volunteer. The disciples wanted to be served, not serve. They wanted to rule, not be ruled.

Imagine the disciples’ shock when Jesus took off his outer garment, wrapped a towel around his waist and washed their dirty feet! The master became a servant. The CEO became a gopher. He even washed the feet of Judas, who would betray him into the hands of the Jews who wanted him silenced (v. 11); and of Peter, who would later deny that he even knew who Jesus was (v. 38).

When he finished cleaning the disciples’ feet, Jesus told them to follow his example of humble service. We too need to follow his example in our family and work lives. We should serve our wives, children, coworkers, bosses, friends, and even enemies. Take a few minutes an identify some jobs or chores that you don’t normally perform and volunteer to do them.