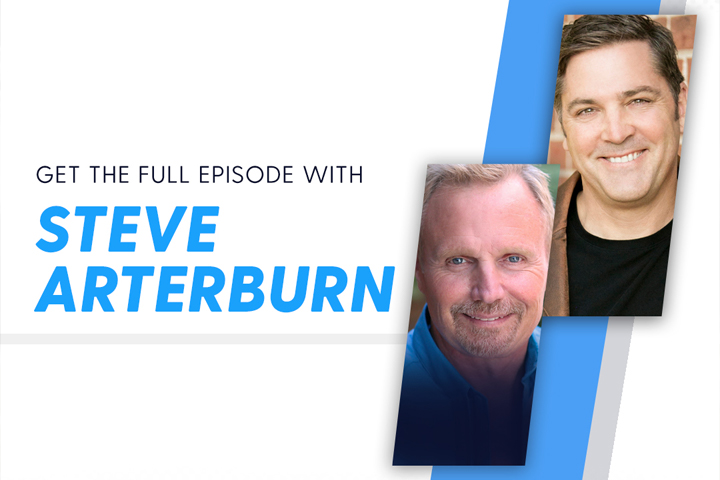 “Sometimes you have to disturb the peace to make peace. The strategy to keep your husband’s addiction and actions quiet, such as to not reach out for help when he beats you, is a problem. That’s keeping the status quo, and we know that God does not honor peacekeepers; He honors peacemakers.” — Steve Arterburn

COLORADO SPRINGS — Ken Harrison is joined by best-selling author, radio host, and pastor Steve Arterburn on the latest episode of “On the Edge with Ken Harrison.” Together they discuss how pornography addicts men, how it creates a supernatural bond that leads men to hate their wives, and why women covering for their husbands and concealing their problems makes things worse. In addition, Arterburn shares his own story of the connection between pornography in his own life.

Highlights of Arterburn’s interview (edited for clarity) in the podcast include:

Ken Harrison: “Many men become stuck in the cycle of pornography addiction. It begins at a young age with inappropriate images and grows into a gripping addiction, eroding values, self-esteem, and relationships along the way. How does this affect the relationship between husbands and wives and how does a man begin to find healing?”

Steve Arterburn: “When a guy is bonding with pornography, it takes the place of the bond we experience within sexual relationships in a marriage. For example, there is the presence of oxytocin, a hormone that similarly bonds us to our wives. A bond with pornography is not just an attraction, but rather an attachment. In turn, your wife becomes a threat to this bond, so it becomes confusing why you can’t stand her anymore. In fact, some really develop a hatred toward their wives because of this new supernatural bond they’ve created with porn. This is one of the reasons why you can’t undo this addiction on your own. You don’t have the power. You have to get away from pornography and start the recovery process.

With the help of other people in the power of the Holy Spirit, you will win and be victorious, but you won’t reach this if you continue to try to recover on your own. Join a recovery program that requires humility, honesty, and the support of other men in similar positions.”

Ken Harrison: “After our recent Marriage Summit, we received letters from women with a similar narrative. These women shared that their husbands are respected in the church, but they’ve got a pornography problem. Most of the time, they’re decent guys, but sometimes they’ll fly off the handle and beat them or scream Bible verses at them about submitting because the wives don’t want to engage in the perverse world that their husbands live in. These women ask who will help them and who will do something about their current situation. What would you tell them?”

Steve Arterburn: “Sometimes you have to disturb the peace to make peace. The strategy to keep your husband’s addiction and actions quiet, such as to not reach out for help when he beats you, is a problem. That’s keeping the status quo, and we know that God does not honor peacekeepers; he honors peacemakers. When a woman says, ‘Well, I don’t want to destroy his reputation in the church’ or whatever, then you’re choosing passivity.

You are enabling evil to exist in your home. So, this is why I say we’ve got to deal with you first. We’ve got to either get the courage within ourselves, or we have to bring people around us. With two or three women together, a wife might be able to make the decision. But, keeping it secret and living in your shame and silence will not help end the cycle.

It takes the woman being willing to speak up for any of this to change. You would not only save yourself, but you would save other women who would hear what you did, and then they would step forward and have the courage to no longer let a man under the guise of Christianity, faith or godliness, abuse another woman. Jesus did not abuse women. He honored women. Any man that’s doing anything other than honor his wife has no place in church leadership. They’re not following Christ — they’re following themselves.”

Ken Harrison: “You were a Christian. You were going to a Christian college as a well-respected guy. But, you had a secret habit of looking at pornography, which led you to get a girl pregnant. Horrifyingly, you were instrumental in her having an abortion and you suffer the consequences of that choice. Many need to know that you can be a Christian, have a really big screw-up and still be used incredibly by the Lord. Is there anybody who’s too evil to get saved? What if someone’s listening and they’ve killed somebody, or they’ve been with prostitutes and drugs — are any of those people excluded from being saved?”

Steve Arterburn: “No. I killed someone and I’m absolutely convinced that I’m going to go to heaven. We can mess up, and we can be the worst of the worst, but we can all be saved through repentance and submitting to God. Having worked with Prison Fellowship, I know of the stories of people who committed the most heinous crimes. People on death row have turned their life over to Christ, and they’re experiencing a new kind of life. You are not beyond the grace and mercy of God and Christ. One of the greatest truths in the Bible is that God is rich in mercy. That’s because God is love. He loves you so much that his mercy is there for you and through his Son, you can be saved no matter what you’ve done. He still loves you, just like you would love a child no matter what they did.”