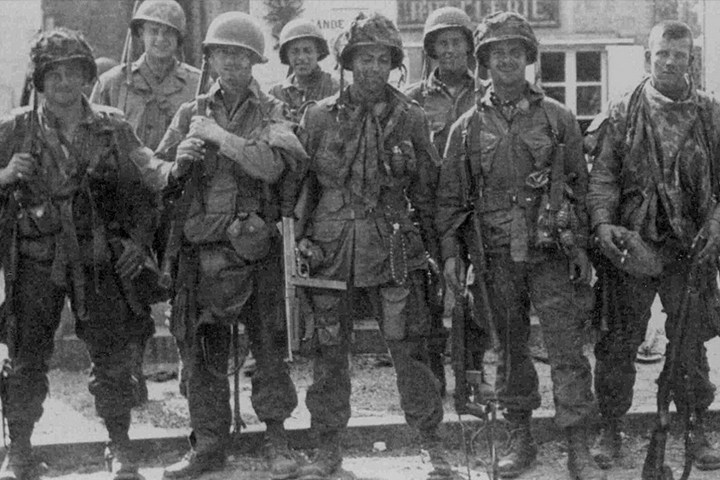 As America commemorates the 75th anniversary of D-Day this year, Promise Keepers’ COO Vance Day tells about his personal connection to one of the “Band of Brothers” who stormed the beach in Normandy.

As the green light suddenly glowed, a young second lieutenant shuffled up to the door of the C-47 and leapt out into the darkness. Other troopers tumbled out behind him. Parachutes unfurled and clapped open.

The young, green pilots flying the C-47s sped up and took evasive action to avoid the barrage of German flak and machine gun tracers filling the air. As a result, the U.S. paratroopers were jumping way too low and at too high a speed.

The force of the propeller blast was so great that the chin strap on Lieutenant Buck Compton’s helmet snapped. The rope on his leg bag also broke, and he lost all his equipment. As he landed in a Normandy field in the early hours of the Allied invasion of Europe on June 6, 1944, Lt. Buck Compton had only a jump knife as a weapon and was miles from his assigned landing zone.

By day’s end, Lt. Compton — one of 12 green American paratroopers — would help defeat an estimated 70 dug-in veteran German paratroopers. The team would also assist in destroying four 105 mm cannons at Brecourt Manor in Normandy, which were firing on the American infantry landing on Utah Beach. For his bravery and leadership under fire that day, Lt. Compton was awarded the Silver Star.

I met Buck in 2000 as a result of producing a documentary on that battle. I interviewed Buck and found him as down to earth as any hero I had ever met. He became a personal friend. Eight years later, sitting at my kitchen counter, Buck came to know the saving grace of Jesus Christ and entered the last stage of his life a believer.

Born in Los Angeles, California, Lynn D. “Buck” Compton grew up playing sports and dreamed of being a major league baseball catcher. In 1939, he attended UCLA and earned a starting position on the varsity football squad and played in the 1943 Rose Bowl game. However, baseball was his first love. He played catcher for UCLA and assisted the team to several winning seasons. Of course, having Jackie Robinson as a teammate helped.

When World War II broke out, Buck was commissioned as a Second Lieutenant in the U.S. Army. He was assigned to the 506th Parachute Infantry Regiment as assistant platoon leader in the 2nd Platoon, E Company. He was young, in an elite outfit, and was about to partake in the largest military invasion in modern history.

One of the men in Lt. Compton’s platoon was an Oregonian named Don Malarkey. “He is one of the greatest guys I’ve ever known,” said Don Malarkey of Compton. Their friendship spanned years and provided great memories. Don was one of the 12 who attacked the German artillery at Brecourt Manor with Lt. Compton, winning the Bronze Star with Oak Leaf Clusters.

The two fought together in Holland until Buck took a German round in the buttocks. Don led the effort to drag Buck to the back of a tank and off the battlefield. Buck rejoined the Company just before the Battle of the Bulge, when Hitler made a last great attempt to forestall the Allied advance by launching a surprise attack through the Ardennes forest at a weak point in the American lines.

The Germans had to take Bastogne, a Belgian city that controlled the road network in and throughout the Ardennes region. On December 16, 1944, the German army rolled over the American frontline units causing horrific casualties. Gen. Dwight D. Eisenhower had only two divisions in reserve that he could possibly throw into the fray in hopes of blunting the German advance long enough for other units to be moved to the battle from other sectors.

The 101st Airborne Division was being rested and refitted in Mourmelon, France, after fighting a grueling 78 days in the muck and mud of Holland. Lt. Compton, Sgt. Malarkey, and the rest of E Company had turned in their equipment and ammunition and were waiting a total refitting of combat gear and winter clothing when the German divisions hit the American lines. Despite their depleted number and the lack of sufficient equipment and supplies, Eisenhower deployed the 101st to Bastogne and gave orders that the city had to be held at all costs.

Buck Compton and Don Malarkey were trucked in an overnight express to Bastogne and dumped out west of the city in their summer issue clothing, with essentially no ammunition and in weather that would soon dip below zero. Malarkey recalls Buck asking, “Do you have any ammo for that carbine?” Don, like many of the other men in this unit, didn’t. Buck returned with a clip and handed it to Don, saying, “Here, this may come in handy.” Off they went to stop the Germans who outnumbered the 101st (15 to 1, by some estimates), outgunned the Americans, and were rolling toward them with tanks.

Lt. Compton did not recall the siege of Bastogne with any great fondness. “We were outnumbered, surrounded, and without proper equipment. We lost a lot of men — good men.” He and his platoon endured the rain of fire dropped on them during the nine days they were surrounded. He saw his men killed, and two of his closest friends each lost a leg. After the 101st was resupplied by air and the siege was broken, Buck got trench foot and was shipped to the rear.

Author Stephen E. Ambrose recounts the remainder of E Company’s service in his book Band of Brothers, which was later made into an epic miniseries released in 2001 by HBO. The miniseries features both Buck Compton (Neal McDonough) and Don Malarkey (Scott Grimes) as central figures in E Company.

After his recovery, Lt. Compton was put in charge of all Army athletic events in the European Theater. His service days ended with an office in Paris before being discharged stateside as a First Lieutenant.

Buck did not consider himself a war hero when he returned home. “I did my duty and came home — that was it.” After the war, Buck finished his degree at UCLA, worked as a detective for the Los Angeles Police Department, and then passed the California Bar Exam. Eventually Buck became a prosecutor for Los Angeles County. One of his last convictions was that of Sirhan Sirhan for the assassination of Senator Robert Kennedy.

In 1970, Governor Ronald Reagan appointed Buck to the California Court of Appeals for the Second Judicial District. Judge Compton served on the bench until his retirement in 1990. He moved to Mt. Vernon, Washington, to be near his two daughters and their families and provided weekly policy and political commentary on local radio. “I’ve lived a full life and have no regrets. I’m just glad to be around,” he often said.

Personally, I owe Buck a great deal. He was a mentor, a friend, and a colleague. It was Buck who encouraged me to place my name into consideration for appointment as a Circuit Court judge. He believed in me and supported me; we traveled together for 10 years all through North America and Europe, even lecturing on leadership and history at the White House and before members of Congress.

Buck was thrilled when the Governor appointed me to the bench. He traveled to Oregon and spoke at my investiture (the public robing ceremony) as a judge. I didn’t know what Buck would say about me, but I was floored when he told the audience that he wanted to be like me. I was flabbergasted. Here was my hero, saying he wanted to be like me?

As I’ve pondered that moment, I’ve come to realize that all of us need brothers who will come alongside us and encourage us, strengthen us, and hold us accountable. I thought I was the main one who benefited from my relationship with Buck, but apparently there were traits in me that helped him be a better man as well.

That’s a big part of what Promise Keepers is all about. Through our upcoming stadium event July 31–August 1, 2020, we want you to see there’s an army of guys like you who want to be the men God intends them to be. But we also want to help you connect locally to a small band of brothers who make you stronger in ways you may have never considered — like Buck did for me.

Four months after speaking at my investiture, Buck passed away. He was 91. I still miss him greatly. We all owe a great debt to Buck and to each of those who have served our country. Many never came back. Please take time to remember those who have served — in whatever conflict — during this 75th-Anniversary season of D-Day. If you’re able, reach out and say thank you. Without brave soldiers who step up to defend the republic, we would not have the legacy we possess to pass on to the next generation.